Communication is now widely recognised as a critical component in improving the quality and safety of health care. Yet it is often still defined rather narrowly, in two ways.

First, it is often described in terms of information transfer, or transmission of facts. In that view, information flows are tracked to see where the communication has broken down, preventing essential knowledge from reaching those who need to know: For instance, when someone knows but does not communicate to colleagues that a patient has a latex allergy. In the view I adopt, which is grounded in social semiotics, communication is not just about ‘pieces of information’, or ‘facts’. It is also about how messages are formulated/articulated by one person, and understood/interpreted by another. That process is never a matter of transmission: each interpreter attaches different meanings to the ‘same’ message. Communication is also about what often subtle variations in articulations of messages say about the social-professional roles of and relations between the communicators. And it is about the structure of and relations between different messages over longer stretches of time.

Take the following example. A surgical trainee is assisting a consultant who is ‘doing’ a laparoscopic cholecystectomy. At one point in the operation the trainee says, “Can I have the endoclips ready please”. The trainee is addressing the scrub nurse, asking her to unpack a stapling instrument and have it ready to hand. At the same time, the request makes explicit (‘communicates’) to surgical insiders the trainee’s interpretation of the state of the operation: he anticipates that the consultant will soon be ready to put staples on the cystic duct and the cystic artery, so that the structures can be divided. It also means that the trainee believes that these structures have been sufficiently freed and cleared by the surgeon to be able to correctly identify them. Making the request for the endoclips also indicates that the trainee takes it that he is in a position to make that request, and that the consultant agrees with his judgment of the situation.

Second, communication is often described in terms of talk, language, speech and writing. A social semiotic perspective describes communication as a multimodal phenomenon. It postulates that we make meaning in a range of different modes of communication: sometimes in speech, sometimes in writing, and often using other means: drawing, gesture, placement and movement of bodies and objects in space, and so forth. This multimodal perspective is particularly relevant to health care. If the focus is on language alone, one might be led to believe that health care is about consultations, case presentations, conferences; if we adopt a multimodal perspective, the full range of clinical practice comes into view. It recognises a surgeon holding up his hand and a scrub nurse placing an instrument in the surgeon’s hand as an instance of communication as much as that nurse asking the surgeon what instrument is required and the surgeon naming that instrument.

That perspective produces a much more encompassing picture of communication. Take the following instance of communication between two surgeons who stand at the operating table; an impression of their position and bodily configuration is given in the Figure below.

The surgeon is in the process of tying up a blood vessel. He has just tied several knots, and now he is pulling the tie so that it becomes stretched. The assistant, who has a pair of scissors in her right hand, then reaches her arm out to cut it. The surgeon’s frozen position of one hand held up ‘in the direction of’ the assistant, while keeping a stitch stretched, signifies that the former is inviting the latter to perform the next action. That is, the surgeon is addressing the assistant gesturally. While the cessation of the knot-tying and the subsequent fixed position of the surgeon’s hand signifies when that next action is to be performed, the precise placement of the surgeon’s fingers on the stitch signifies where on the stitch to perform that action: by varying the distance between his fingers and the point where the stitch is attached to the blood vessel he marks out the area where the assistant can cut. The application of the scissors by the assistant also ‘means’. It is an acknowledgement of the prompt to perform the next action and of her social role in this environment as ‘second assistant’, with responsibilities for, among other tasks, cutting stitches. Communication here is entirely gestural: one member of the team “addresses” another, who interprets the action made and produces the subsequent action.

I have outlined this perspective on communication with Gunther Kress in a recently published book, titled, Multimodality, Learning and Communication: A Social Semiotic Frame. 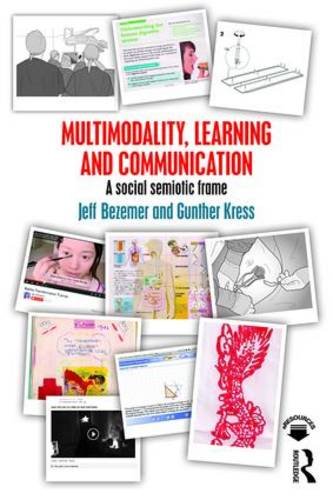